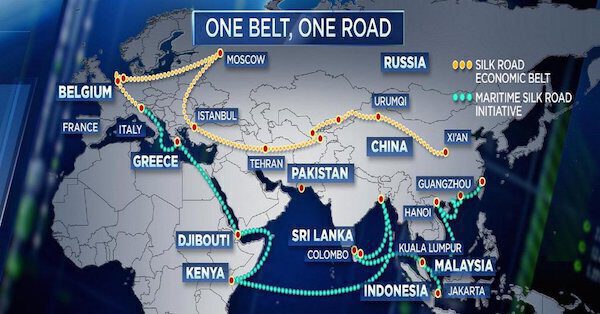 China One Belt and One Road (OBOR) or Belt and Road Initiative (BRI). Before these we must know the background of this initiative that is Silk Rout.  The Silk Road was a network of trade routes connecting China and the Far East with the Middle East and Europe.

2013 China’s President Xi Jinping, who drew inspiration from the concept of the Silk Road established during the Han Dynasty in China officially opened trade Around 200 B.C., Silk Route was a network of trade routes that connected the east with the west.

Here ‘Belt’ refers to the overland routes (involving only landlocked regions) for road and rail transportation. It called the SREB (Silk Route Economic Belt) while the term ‘Road’ interestingly refers to the trade through sea routes. MSR (Maritime Silk Route).

They contain the following economic corridors:

China has announced investments in the various infrastructure projects and is funding them by offering low-cost loans to the participating countries BRI estimates vary widely from US$1 trillion up to US$8 trillion investment.

Many participating countries, like Kyrgyzstan and Tajikistan, are positive about OBOR due to massive investments by China in local transmission projects in these nations.

Landlocked Nepal has recently joined OBOR by signing a deal that will help it improve cross-border connectivity with China, and Pakistan is set to benefit from the $46 billion China Pakistan Economic Corridor (CPEC) that will connect southwestern China to and through Pakistan, allowing access to Arabian Sea routes.

At the same time, the BRI has been increasing its geographical scope by shifting its focus from the historic Silk Road region to the entire globe.

By connecting the less-developed border regions like Xinjiang with neighboring nations, China expects to bump up economic activity. OBOR/BRI is expected to open up & create new markets for Chinese goods. It would also enable the manufacturing powerhouse to gain control of cost-effective routes to export materials easily.