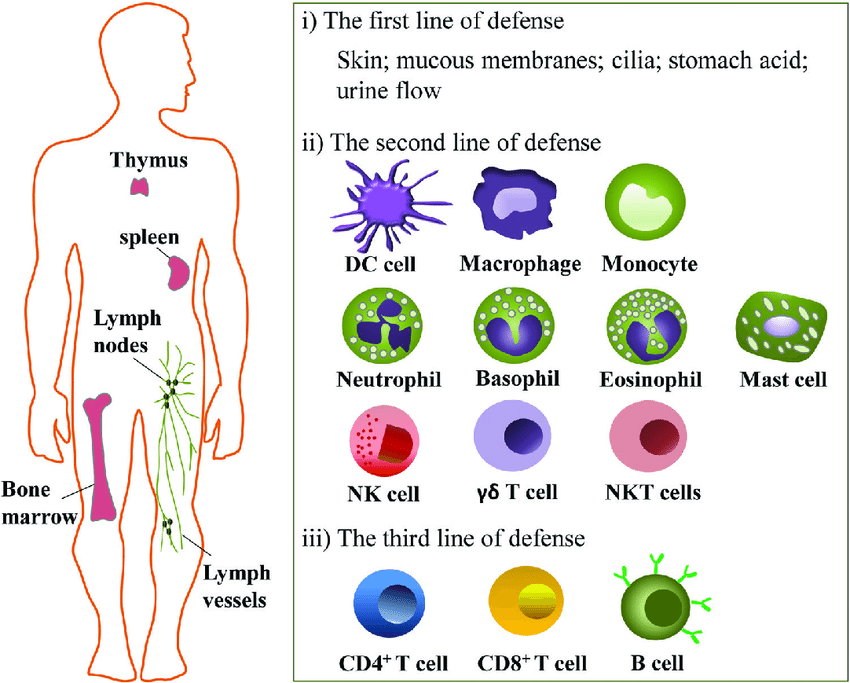 What is immune system

The immune system is the first line of defence of our body against alien Attack. The major function of the immune system is to protect the host from environmental agents such as microbes or chemicals, thereby preserving the integrity of the body. The organs and processes of the body that provide resistance to infection and toxins.

The main parts of the immune system are: 1) white blood cells 2) antibodies 3) complement system 4) lymphatic system, 5) spleen, 6) thymus, and 7) bone marrow
1. White blood cells
White blood cells are the key players in your immune system. They are made in your bone marrow and are part of the lymphatic system.
2. Antibodies
Antibodies help the body to fight microbes or the toxins (poisons) they produce. They do this by recognizing substances called antigens on the surface of the microbe, or in the chemicals they produce, which mark the microbe or toxin as being foreign. The antibodies then mark these antigens for destruction. There are many cells, proteins and chemicals involved in this attack.
3. Complement system
The complement system is made up of proteins whose actions complement the work done by antibodies.
4. Lymphatic system
The lymphatic system is a network of delicate tubes throughout the body. The main roles of the lymphatic system are to manage the fluid levels in the body react to bacteria and others.
5. Spleen
The spleen is a blood-filtering organ that removes microbes and destroys old or damaged red blood cells. It also makes disease-fighting components of the immune system (including antibodies and lymphocytes).
6. Bone marrow
Bone marrow is the spongy tissue found inside your bones. It produces the red blood cells our bodies need to carry oxygen, the white blood cells we use to fight infection, and the platelets we need to help our blood clot.
7. Thymus
The thymus filters and monitors your blood content. It produces the white blood cells called T-lymphocytes.

There are three types of immunity in humans called innate, adaptive, & passive:

1-Innate immunity
We are all born with some level of immunity to invaders. Human immune systems, similarly to those of many animals, will attack foreign invaders from day one. This innate immunity includes the external barriers of our body — the first line of defense against pathogens — such as the skin and mucous membranes of the throat and gut. This response is more general and non-specific. If the pathogen manages to dodge the innate immune system, adaptive or acquired immunity Triger on.

This type of immunity is “borrowed” from another source, but it does not last indefinitely. For instance, a baby receives antibodies from the mother through the placenta before birth and in breast milk following birth. This passive immunity protects the baby from some infections during the early years of their life.
The immune system is incredibly complicated and utterly vital for our survival. Several different systems and cell types work in perfect synchrony (most of the time) throughout the body to fight off pathogens and clear up dead cells.

The Glorious Quran saying about the Guardian by Our Creator Allah

Quran surah At Tin 95 Ayaat 4 (95: 4)
(95:4) (That) We have surely created the human being in the finest make and the best proportions (with enormous capabilities for an all round advancement through the process of evolution). Translation by AMATUL RAHMAN OMAR

Quran surah Al A’raf 7 Ayat 204 (7: 204)
When the Qur’an is read, listen to it with attention, and hold your peace: that ye may receive Mercy. Translation by ABDULLAH YUSUF ALI

And Glory be to Allah! Allah Almighty has commanded us of recitation and pay attention to Qur’an for this listening is a cause of Allah’s mercy and healing of many diseases. ABDULDAEM AL-KAHEEL

In study showed that the regular listening of Qur’an raises the body’s immune system and the study has been noticed that those who preserving chapters of Qur’an, performing regularly in recitation and listening are having better health and stronger immune system.

Signs of Allah in Our Immune System

Every day, a war is fought in the innermost parts of your body unperceived by you. On the one side are viruses and bacteria that aim to intrude into your body and take it under control and on the other are the immunity cells that protect the body against these enemies.

How many people are aware that they have such an organized, disciplined and perfect army (Immune System embedded by our creator Allah) inside their bodies? How many of them are aware that they are surrounded on all sides by microbes that, if unimpeded, would cause them to catch serious illnesses or even die? Indeed, there are many dangerous microbes in the air we breathe, the water we drink, the food we eat, and the surfaces we touch. While one is unaware of all that is going on, the cells in one’s body make strenuous efforts to save one from an illness. Activities of immune system is done by microscopic cells unobservable to the naked eye.

It is extremely difficult for a person without an immunity system or with an ill-functioning one to survive, since he would be exposed to all the microbes and viruses in the outside world. Today, such people can exist only in special enclosures with no direct contact with anyone or anything outside. Therefore, it is impossible for a person without an immunity system to survive in a primitive environment. This leads us to the conclusion that an extremely complex system such as the immune system could only have been created all at once and with all of its elements intact. 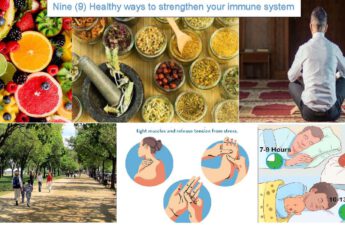